Outsiders psych themselves out. Becoming an artist, more specifically a ceramist, is not about natural talent. It is about time and effort. A diligence to become better. No one is born ready to play soccer, just as no one is born to draw. Or sculpt clay. It’s a practice that leads to perfection with time and failures, the most basic thing individuals need to master this art is a willingness to continue even when he or she does not want to anymore.

In a room, there are several students. All of them have had prior experience taking an art course, but not all of them have ever experienced building via clay. Some of the students fool around and joke. There are those who do not value the chance that they have been given. In fact, the majority seems not to care. Only one or two of the students take to this art. Of building things, out of clay with their own two hands. There is a value to creating, the life of an artist is something most are too afraid to endure. They see their lack of skill and claim, “I could never do that,” but that is not true. An artist is not just born. They are made. Through time and practice; a skilled artist takes years to create. Like a wine, the longer they have, the better they are. 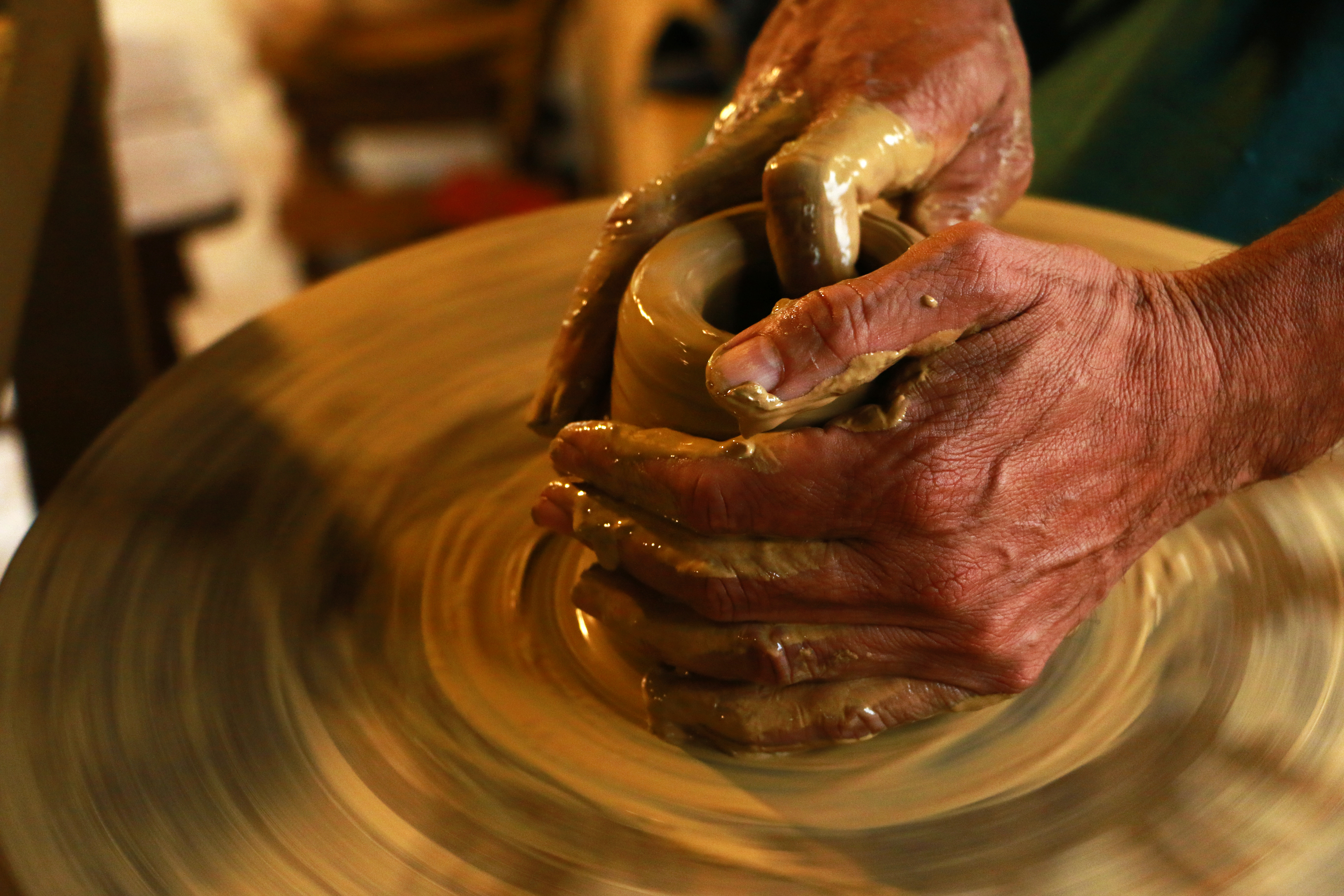 Technical skills of an artist are just one part of the process. Another side is that of the morals, of the creativity. How far they are willing to put themselves out there. An artist bares their souls to the public and endure the critics. The best pieces are the ones that have a story, something that goes beyond the surface. And the artist is the one that knows that story best, yet rarely do they share the full extent. After all, no matter what they say, it’s the people who decide what they hear.

If someone were to look at a handcrafted bowl, they could think that making that bowl was easy or they could assume that some skill went into this. They would probably not think deeper than that. They wouldn’t think of the journey that the clay had had itself or the process by which it was made. The clay that I’m most familiar with is clay that is local to me. Where I am from, there is a business that digs the clay right out of the earth. After being processed, it is driven the few miles to the studio. From there on, it is either made into something or tossed in a bucket to be reclaimed. The clay that makes it into a final product is shaped, sculpted, and then dried out. It’s size shrinks back, first when the water is evaporated from it then again when it is fired. The color or the texture that it’s given is another step of the process, but why were those colors chosen? The texture?

An artist bares his or her soul for the art. And then society overlooks it. The complex realms that they put hours, days, weeks into are thought of for a moment and then forgotten. The life of any artist is hard. They suffer in silence. And only after they are gone does society look back at their art to remember the individual. Being an artist is hard. There is little gain from it. During an artist’s infancy, they are worse off. The few connections that they do have, it does not bring them status or fame. So why is it that someone would want to be an artist? The only thing that they could possibly get is self-satisfaction. An inner peace with themselves. Being an artist is one of the hardest things to master. It required an infinite pool of creativity.

Mastery does not come just from watching another perform the task, though it does provide a platform for imitation. The language of a ceramist is “mastered by overt instruction (even less so than languages, and hardly anyone ever masters a language sitting in a classroom setting.) We master by apprenticeship, through social practices and supported interactions and time by people who have already mastered the discourse” (Gee 7). Experience is an essential part of mastery. Certain hand placements, recognizing how pliable clay will be just from the look of it, even mixing glazes. Talking about such things are completely different from experiencing it. That is why the best mentors will let their apprentice try out all his or her ideas, so that they will see what exactly that will do or why that would be a bad idea. Instead of simply being told yes or no, real experience is gained.

While masters and sponsors are important for an apprentice to gain the full membership to being a ceramist, they don’t take pupils under their wings just for the sake of it. They are getting something out of this arrangement as well, “they lend their resources or credibility to the sponsored but also stand to gain benefits from their success, whether by direct repayment or, indirectly, by credit of association” (Brandt 557). Sponsors gain a peer, someone else who appreciates and understands them. An ally of the same field of which they are a part of.

Decades ago, a Japanese potter created a style of pottery, called Kintsugi, where broken pieces would be put together again with a mixture of gold and an epoxy. Originally it was thought that broken pieces could never truly be fixed, at least to a level that would be pleasing to the eye. Once clay has been fired initially, it cannot revert to its green-ware form. This made the idea of saving broken pieces improbable, but with this technique, broken pottery can be given a new image. This style holds a strong belief that the pottery is more beautiful for having been broken. The cracks and mends show a history to the piece.

This is not meant to assume that each pot does not have its own story. On the contrary, clay has many secrets hidden in it by the time someone comes along to purchase a piece. Like where the clay originally came from. Or how many times the vase had been started only to be wedged back down or tossed in the reclaim bucket. If it had turned out the way the artist had intended, or if it was as much a surprise to them as it would be to the buyer. The glazes that are homemade tend to be more unstable in their form and decay after time, one firing might be different from the next. There are some steps to a potter’s process that must be taken on faith. A piece shrinks as it dries out and then again when it is fired and becomes bisque ware. There is of course an estimation for how much a piece will shrink and one could take the time to figure it out but a seasoned potter can draw on their previous experience to guesstimate. Glazes can be tested before applying it to a piece but there will then be a delay; the final piece may not reflect what the test piece showed. The initial look of glazes cannot be trusted, reds become vivid greens while greys become blue. There are no certainties for clay, it is too fragile. Whether it will survive a firing is a chance; a chance that improves with a potter’s skill, but there are no guarantees. Some parts of the process must be taken on faith.

The basics of pottery are easy to master. Individuals can pick up on the superficial features of mastery with practice but there are subtler aspects that one cannot learn without interaction with masters (Delpit 557). A prominent difference between master and apprentice is their willingness when it comes to store made glazes. A master might claim that it is not true pottery when a pre-made glaze is used, that the maker slacked off. While an apprentice would find the pre-made glazes a blessing and appreciate the diversity that it offered them. The glazes are more stable and still create a unique look for each piece. They apply the glaze themselves, so it should count as a full piece. The difference between master and apprentice here are the values and beliefs. The apprentice who chooses a premade glaze has not yet acquired the full identity of a ceramist.

Gaining a foothold in the world of art is possible to anyone that has the connections or the status. Becoming a potter is an expensive endeavor that those without funds or relationships to the art would struggle to find an opening into the world, but those that have a foundation only need to be willing to dedicate themselves to the act completely. This begs the question of whether it is worth the effort to enter such a world. The answer is yes, but only those who are a member will truly understand the meaning, the value behind such a world.